Back to nature with a unique heritage of flora and fauna, a natural environment protected and enhanced by its inhabitants and providing access to the National Marine Park. The north western part of the island is rugged, while in the south-west you can find the most beautiful beaches; Megali Ammos, Steni Vala, and Kokkinokastro to name but a few. The island's port, Patitiri and Votsi form the town which is in traditional style, the island has a thriving nature-friendly tourism industry alongside the local agriculture and fishing businesses. 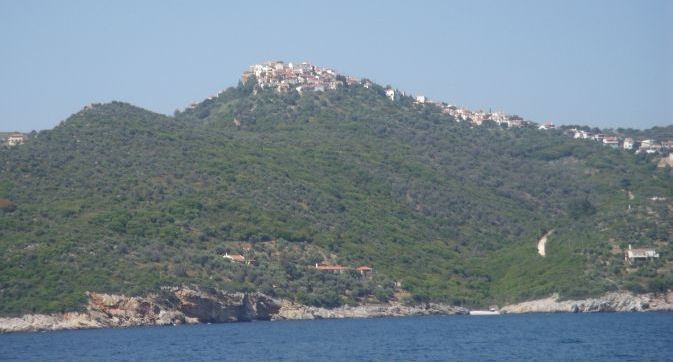 The island is renowned for its natural beauty and unspoilt beaches - mainly pebble. The few sandy beaches include Chrisi Milia (a shallow sandy beach that is ideal for children) and Marpunta. Traditional tavernas can be found on several of the beaches, including Rousoum and Votsi beach. These are perfect places to try traditional fresh fish dishes, such as kakavia and chargrilled octopus. You can also try other local delicacies, such as hamalia and amigdalota, or enjoy a quiet drink in tranquil Patitiri, with its old-world charm.

Steni Vala is a small inlet, lying on the east coast of Alonissos, opposite the uninhabited island of Peristera.

This stunning cove is one of the most popular destinations for both yachts and larger vessels during the peak season and so an early arrival is prudent. However, during the low season months, you will always find space. Sheltered from the Meltemi and only open to the south east, Steni Vala is a safe cove for most conditions. The best depth next to the quay, can be found opposite Icarus cafe and minimarket owned by Kostas (see picture), who will provide you with electricity, water and showers under the agreement that you spend some money in his establishment.

The Islands close to Alonissos form the core of the Marine Park; Peristera, Skantzoura, Yioura, Piperi, Psathoura and other smaller islands.

There is a group of three caves north of Lalarias. Legend has it that in the third a sea monster lives at the very back and that no-one venturing in has ever come back alive.