The islands of the Northern Sporades:

The Sporades Islands lie to the North of Athens, in the Aegean Sea. Amongst other things, they are famous for the regular summer meltemi winds and as the setting for the 2008 ‘Mamma Mia’ movie. The area is also home to the National Marine Park of Alonissos and the endangered Mediterranean Monk Seal. 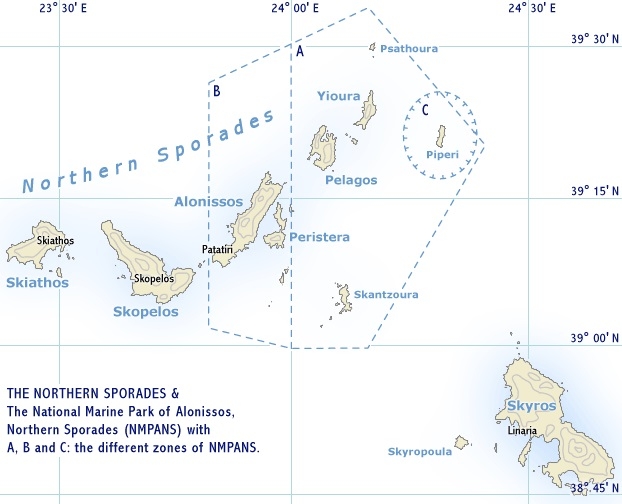 The Northern Sporades – Βoρειες Σπορaδες is the proper name for what people usually call the Sporades, and consist of the scattered (hence: sporadic) remote and fertile islands of Skiathos, Skopelos, Alonissos, Skyros, Pelagos or Kira Panayia and the uninhabited Peristera, Skantzoura, Yioura, Piperi and Psathoura. In contrast, the less travelled Eastern Sporades refer to the sailing area that includes the islands of Lesbos, Limnos and Chios, which string along the Turkish coastline.

The bigger islands in the Northern Sporades sustain small populations – mostly of craftsmen, farmers and fishermen – and the only proper towns double as ports: Skiathos town, Skopelos town, Patitiri on Alonissos and Linaria on Skyros.

Moreover, on Skopelos island Glossa (via Loutraki port) and on Alonissos island Steni Vala port are also well worth visiting, especially to look for good tavernas in the typically narrow winding streets. But also near the popular beaches on Skiathos and Skopelos you will find lots of tourists in the season, yet as a rule the tavernas and bars tend to be twice as expensive and half as good as in the traditional places.

Indeed, five or six beaches on Skiathos and Skopelos are considered the best in the eastern Mediterranean and near the ports these beaches can be crowded, however if you have your own yacht there are an abundance of stunning bays to drop anchor where you will be all by yourself. If fact the Northern Sporades are as famous for the beautiful scenery and beaches as for the amount of secluded anchorages and wildlife, hence ideal for yacht charter holidays.

The National Marine Park of Alonissos

The National Marine Park of Alonissos in the Northern Sporades (NMPANS) measures 2200 km² and was – much too late – set aside in 1992 by the Greeks for the protection of the unique ecosystem and, particularly, the Mediterranean Monk Seal (Monachus monachus), which symbolizes the Park’s identity. Although the park harbours the largest surviving colony in the whole Mediterranean, the population of Monk Seals around these shores consists of a mere 50 individuals, which makes this animal one of the world’s most endangered species!

Species sighted in this area include dolphins and whales like the common dolphin (Delphinus delphis), striped dolphins (Stenella coerruleoalba) and the long finned pilot whale (Globicephala melas). Making their ponderous way towards distant nesting sites are also Loggerhead turtles (Caretta caretta). The seabed harbours extensive Posidonia sea grass meadows, various species of sponge and also the endangered red coral (Coralium rubrum). Among the numerous bird species finding refuge in the Park is the cliff-nesting Eleonora’s falcon (Falco eleonorae) and the red- black- and yellow-billed Audouin’s gull, one of the rarest gulls in the world. Rare wildflowers, some endemic to these islands, also take advantage of the absence of human footprints.

The NMPANS is divided in two larger zones (A & B) plus an important core zone (C), with varying degrees of protection.

Zone A consists of Pelagos (Kira Panayia), Yioura, Piperi, Psathoura and Skantzoura, and several smaller islets as well as the surrounding waters.

Zone C – the Core zone of the NMPANS – is situated largely within Zone A and focuses on the uninhabited island of Piperi and a three nautical mile marine area around it. All human activities in the core zone, except scientific research with special permit, are prohibited. Special protection measures have also been taken for Yioura, where yachts and tourists should keep a distance of 400 metres. The remainder of zone A has fewer restrictions and is basically open to tourism and to small-scale coastal professional fisheries, but is prohibited for certain cargo-vessels.

Zone B includes the only inhabited island of the NMPANS, Alonnissos (Alonisos, Allonisos), several smaller islands and the marine area around them. Apart from regulations on special fishing techniques, most activities are permitted in this zone.

Sand and pebble beach, great anchorage in southerly and easterly winds. It is said that in 480BC a violent storm that decimated the Persian navy resulted in 400 ships been washed onto the shoreline around this area.

A Minoan prince was buried there. The royal Minoan tomb included a gold plated sword handle and a gold diadem. Tradition demanded that Cretan Royals were buried facing towards homeland of Crete.

There is a group of three caves north of Lalarias. Legend has it that in the third a sea monster lives at the very back and that no-one venturing in has ever come back alive.